The evening at box lake was great, Nice camp spot right by the lakeshore, surrounded by majestic, snow capped mountains and a crackling hot fire - it couldn't get any better. 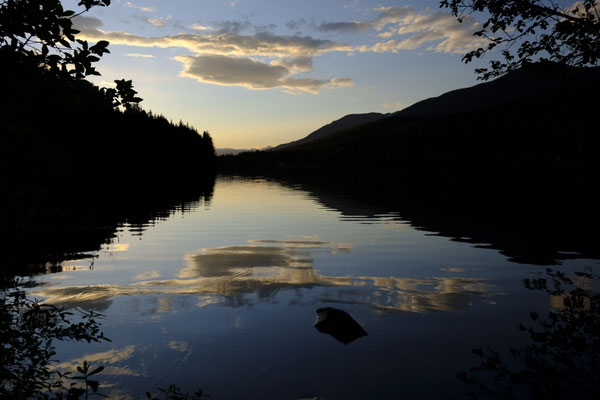 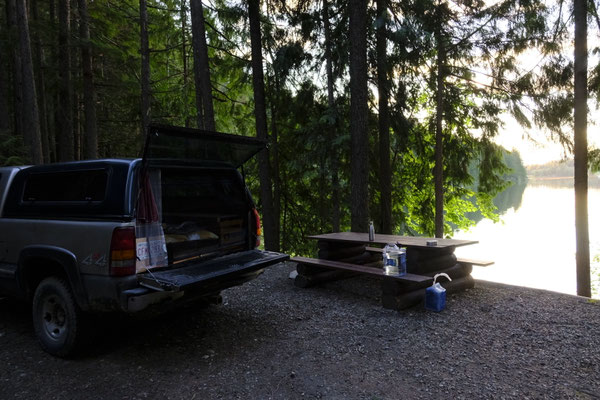 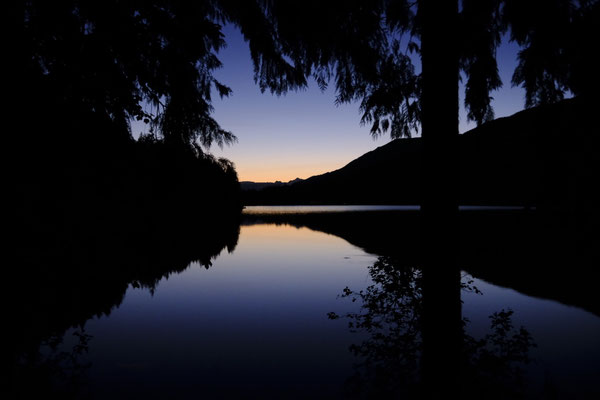 I slept great the first half of the night. Having the truck with the canopy is so much more comfortable than the old car, as I have so much more space. Anyway, it seems like it wasn't quite enough space, at least not enough to share it with a mouse...

She must have gotten in around 2 in the morning. At first I though it was just outside but as she started running over me, from left to right an back and forth I realised, that the problem was a little bit more serious. at first I tried filling every obvious hole with old rags, but that didn't help. Around three thirty I had to surrender, the mouse won. At least for the rest of the night. So I grabbed all my blankets and moved to the back seats in the driver cabin - what a disappointment... At least now I know that the back seats are not to uncomfortable either.

In the morning the mouse was gone and with her half a chocolate bar. I can't blame her, it's been peanut butter chocolate after all...

Thank goodness she didn't go after my coffee so I could get on my way further south to Creston. 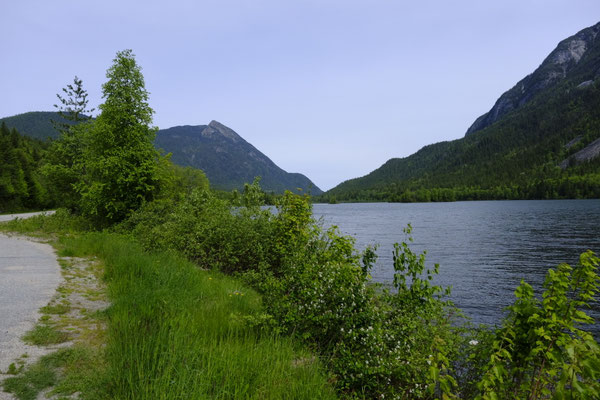 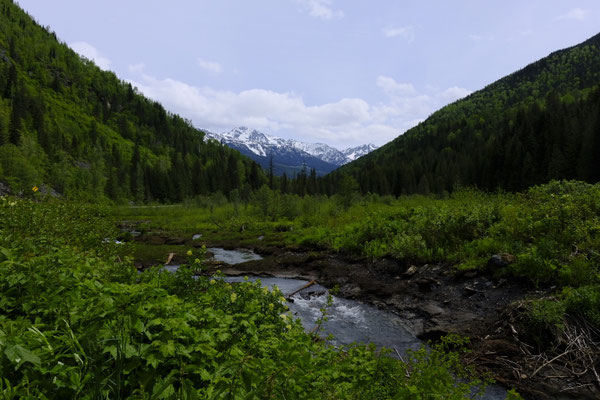 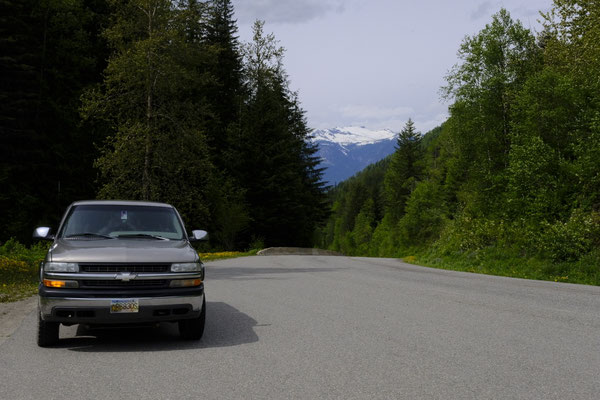 The drive through the west Kootenay region is just beautiful! And so quiet, hardly any people on the roads winding third way along lake shores and trough the mountains. As I had the whole day anyway I decided to stop along the way at a former fire lookout 12 km up a supposedly easy 2WD forest road. Well, never trust Canadian road descriptions. In the end I made it 8km up, before a massive tree blocked the road. With only 4km to go I decided it would be worth it to just walk the last part. So I left my truck behind, grabbed my bear spray and camera and went on my way. With all the summer weather lately I had totally forgotten how exciting it is to walk through slushy snow. I got reminded fairly quick after not even 1km. As I eventually made it to the top the weather had changed too. So the promised glorious panorama looked quite a bit gray. At least I made it up to the top and survived my way back down too (with about 1km backing up the truck that stupid steep, narrow and winding road). At least the ego got satisfied.

Taking the ferry over Kootenay lake I hoped I would get at least some good views during sailing, but as of the Virus nobody was allowed to leave those vehicle and as I was somewhere in the middle of the ferry jammed in between a big tuck and a boat I couldn't see anything.

To make it even better it started pouring down rain once I reached the other shore. So much about the great views and nice roads... At least I had not double finding a friend's place and he had some Pizza for me - life was good again! Even more as we headed out for a little drive to a near by dam and waterfall. No chance I would have ever found that spot by myself, a real insider! 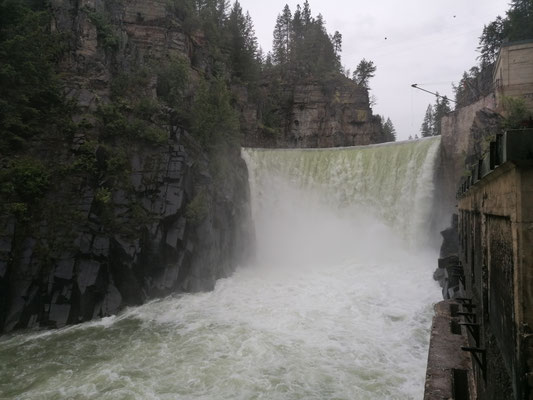 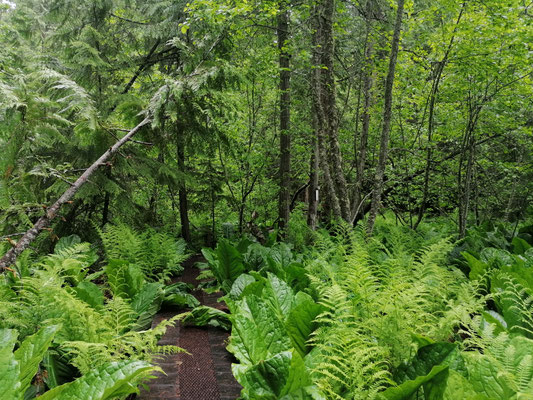 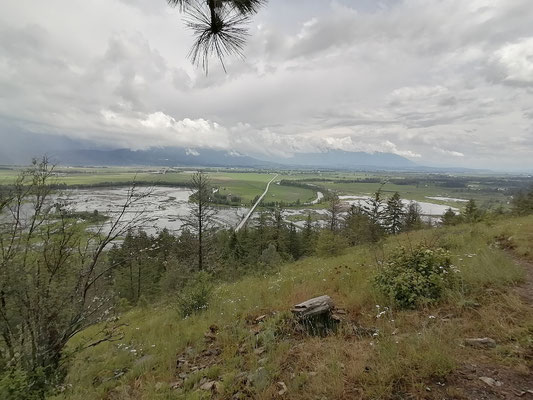 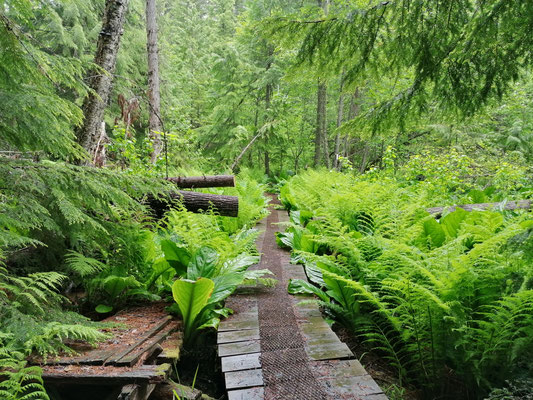 The next two days we spent exploring Crestons surroundings in the rain. Seems like the weather doesn't really like me lately. But we had fun anyway and the waterfalls we visited were just as pretty as I the sun i guess. The first trail we did was called the balancing rock and offered spectacular views of the wide green valley, Creston, Kootenay lake and of course the mountains. On our way back we got soked so badly that we needed the rest of the afternoon to dry. I the evening we got out again to a quick visit at the lake. After another waterfall the next morning and a visit to the wildlife management area in the evening my time in Creston was over again already.

Being pretty much as south as you can get in BC already I turned eastwards. Taking HWY 3 through Crowsnest Pass into Alberta offered another drive with spectacular mountain views. But my destination for today was not the road, it was Waterton lakes National park. Even though I knew that most of the park is currently closed due to a wildfire a few years ago, the time of the year and the virus, I hoped I could do a least a few nice trails or catch some nice views. 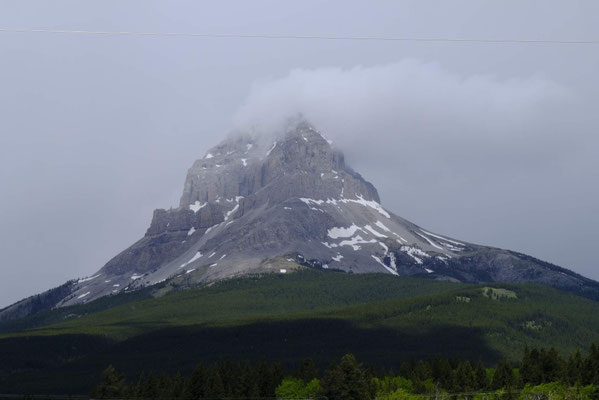 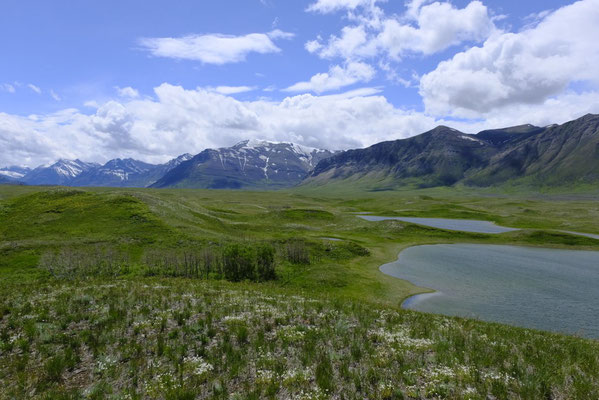 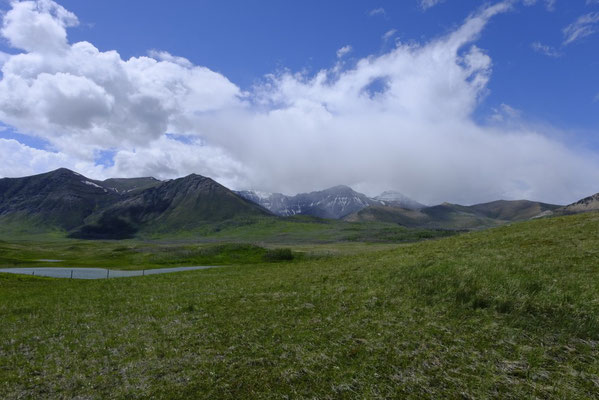 But of course, the weather, how could I forget? It started pouring down on me once again as I headed out too Bertha Falls. But who cares, I guess I'm slowly starting to get used to constantly being soked.

One I was at the falls the rain at least died down, the clouds lifted for a short moment and I could enjoy the majestic scenery around me. Even tough it makes me sad to see all the dead, burned trees, it is also fascinating how lush and green all the bushes on the ground are. And without all the needles and leaves you have a great panoramic view of the surroundings. Nature sure claims the mountains back, it may need some time, but it is definitely coming back.

Now I've set up camp at Waterton Reservoir. Just a few km out of the park but in a complete different landscape. Instead of mountains it is now seemingly endless rolling fields of green grass with hardly even a tree to find. Accordingly strong is the wind gusting arround my truck and I hope I won't get blown away tonight. If so, I hope the mountains on the horizon will catch me up again.