Back To The Mountains

The area around, or better said east of Waterton NP is well known as 'where the mountains meet the prairies'. I definitely do understand why. Its impressive how suddenly the peaks disappear and the endless grasslands show up. I was quite glad when I woke up at the same spot where I fell asleep the evening before, even though the wind was still howling around my truck. Destination for today was the Kananaskis Country , an area just south of Banff NP. The drive there lead me through lush green rolling hills along HWY22 . Nothing off the endless flat Prairies' was to be seen anymore. It rather reminded me of the New Zealand farmland I knew from some years ago. All together it was a pleasant ride leading me north along the east flank of the Rockies. 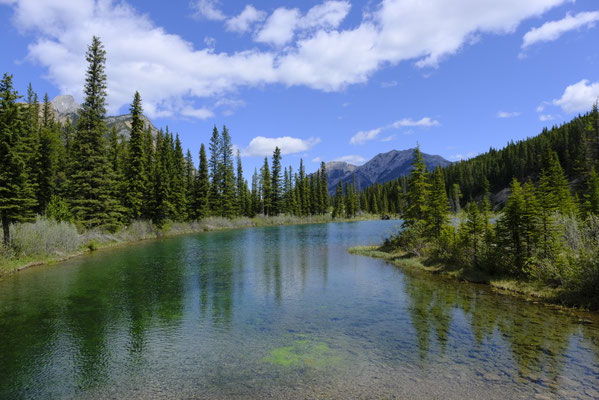 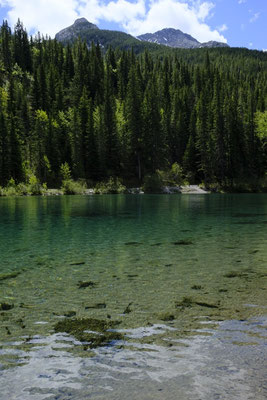 Arriving in the Kananaskis I got surprised by the amount of people I found there. It seemed like finally people got sick of Bering stuck at home and found third way back out. Beside that the Kananaskis is no less impressive than the boardering National Parks.

I went on a little hike up to one of the many Alpine lakes which was of course still snow covered but at least not frozen solid anymore. It was great, and I got there at the perfect time to have it all to myself.

Luckily I managed to get a (super expensive...) Camp spot and spend the night in the freezing cold mountains before heading further north; back to Nordegg.

The following day seemed to be the perfect day for wildlife spotting. In be started out with my first moose. A female that disappeared to quick to take a picture. After that I met some mountain sheep that looked quite a bit scruffy in comparison with the ones I knew from last winter.

In order to make most of my trip I took a little detour to Kootaney National Park and hiked up Marbel Canyon. It was so impressive! The water rushing through was of the most brilliant turquise, digging its way through the bare rock. Every couple of meters a bridge crossed the canyon where you sometimes had to stop and search for the water way, way down below. At the end of the canyon was that massive Waterfall dropping in several steps into the deep. The growling raw was all you could here.

Not quite as spectacular but still very nice were the paint pods just a km further down. Here the shining turquise of the water gets in a vibrant contrast with bright orange occre soil. A sight I have never seen like that before.

Back in Banff NP my little wildlife tour continued as I spotted my first Grizzly just along the Icefields Parkway. Originally I had planned to go on a little hike to bow lake falls, but as the trail head was just 500m further down the road and I wasn't to much looking forward to a Grizzly meeting alone in the bush I decided not to go.

To make the wildlife spotting complete I found another black bear not even half an hour drive from Aurum lodge. Getting back to the lodge was so different to what is was in winter. All the snow had gone and the lake glittered way below just as brilliant turquise as earlier at Marbel canyon. It nearly looked like a fake painting. During the evening I took the opportunity to go down to the lake and check out the little water fall I knew from my last visit. That waterfall, as small and unimpressive it may look is a real hidden beauty. What makes it so special is it's warm temperature.

It's water comes out of a shallow lake system just above where it has the chance to warm up a bit. I do really regret that I didn't took a little shower right away.

The next day I wanted to finally do some proper hiking in the Rockies. The weather seemed to be great, a little windy in the valley around the lake but other than that just perfect. The hike I chose, Allstones lake was apparently a really nice one as it got suggested to me by several different people. So in order to try and be at least a little bit social I invited to current volunteer from the lodge to join me. I was so exited about the hike and Bering back in Alpine area that we made our way up as quick as we could. Once we reached the treeline and had the view of the surrounding peaks, endless forests in the valleys and the lake glittering way in the back things just seemed to be perfect for once. Unfortunately once we catched a glimpse of the lake the guy I took along suddenly felt so sick that he just wanted to turn around and get back as quickly as possible. A picture of the glimpse is all I could get. It looked so nice and tempting... Anyway, the further back down we got, the more frustrated I became. Once again I was so close and still things didn't work out. So I ended up just dropping that guy off at the lodge and went straight on to Jasper NP and Wilkox pass, which was supposed to be another nice hike. 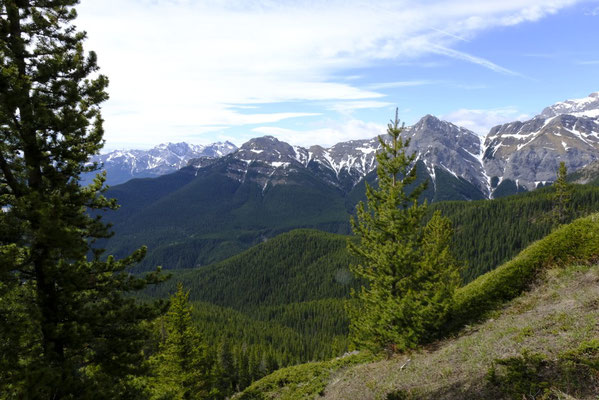 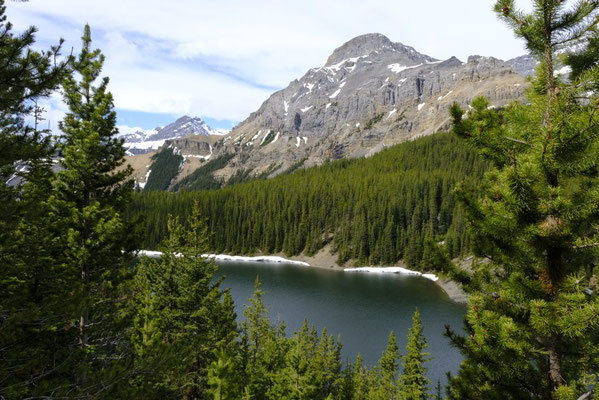 Same old, same old, I couldn't make it all the way to the top as there was still to much snow. As I started calling through the slush all the way to my hips with every step I decided it was time to turn around. At least I still had the spectacular views of Athabasca glacier and spotted quite a few little squirrels along the way. After that, as much as I love the mountains, I was looking forward to see the prairies and get on my way over to northern Ontario.