The Canadian Dream - Or Maybe Not?

What's a typical Canadian scenery? In many cases people would probably say a Grizzly somewhere in the miuntains, catching a salmon out of a river while a bold eagle is flying above. At least that is something I had always thought of when talking about Canada... Now I know, it's not a little kids dream, it's actually real, I saw it!

But first things first, after leaving Nuk Tessli I decided to go to Bella Coola with Theresa and Semi for a night before heading North to the Stewart Classier HWY and catching back up with Doron who intended to go north too. But as the Chilcotin - Bella Coola highway is a 500km long dead end road and I was more than halfway in already anyway I definitely wanted to go all the was to Bella Coola first. Chances are low that I would come back here any time soon.

Straight off the plain we sorted ourselves out and went on our way. The further we drove the more spectacular the scenery got. The mountains creeped closer and closer to road until we reached the well known (and by some people feared for apparently good reason...) Heckman pass. With grades of 18% and a length of 10 km the narrow winding gravel section on the road windows its way from more than 1500m down to 300m. It is steep, all avalanche area, a steep steep drop off at one side and the road in sections barely wide enough for 2 cars to pass each other. Going down we had to stop for a little while to give our ( or mostly my) braked a little rest even though we geared down and used engine brakes as much as possible. But the Bella Coola valley at the bottom of the pass is well worth every single second of the long drive to get there. Down here the valley gets super narrow with steep slopes on either side of the highway. In many places it's not even slopes but rather vertical rock walls. In the valley bottom grows the (unfortunately) fairly rare West coast rainforest that makes everything appear like a magical fairytale forrest, shining in a mystical lush green with moss and fern everywhere. 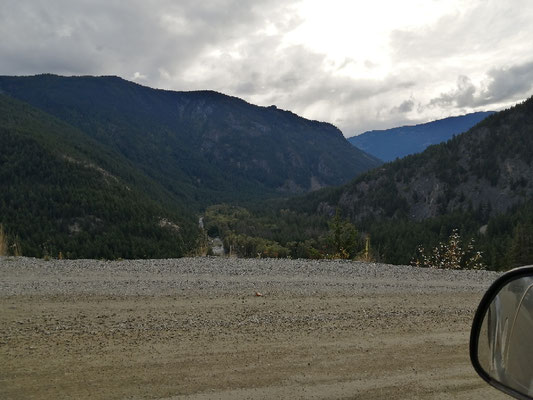 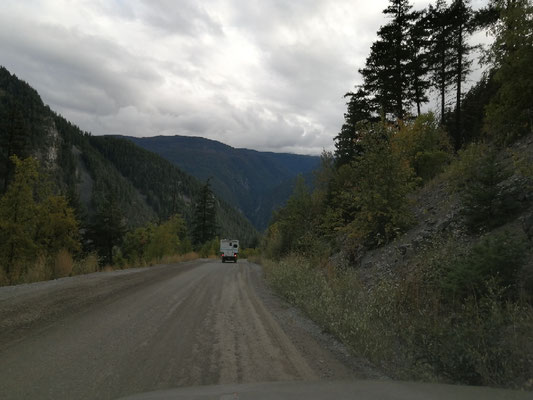 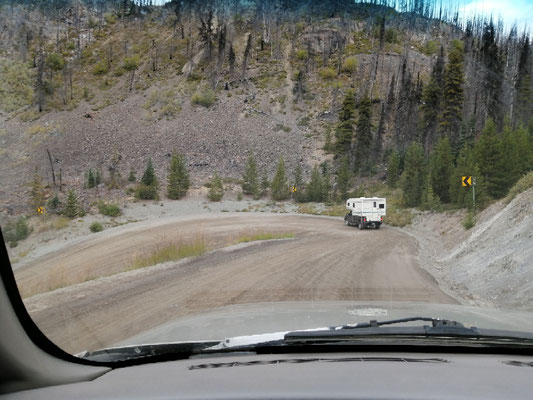 Challenging our luck in the fairly late afternoon we stopped at a wildlife viewing platform before trying to find a camp spot for the night. Supervised by park Rangers and guarded by an electric fence we haven't even had to wait 5 minutes to see a lone Grizzly tracing up and down the river shore looking for Salmon. He was way closer than the one we saw on out hike at Flat top mountain but somehow it wasn't quite as nerve wrecking. After all he had more than enough salmon to eat and we were behind an electric fence... But as we were way closer he was even more impressive. Also all the Salmon swimming in the river was quite the sight as well as smell. Once the Salmon lay thier eggs they simply die so there were just as many dead fish floating around as alive ones.

After we had our fair share of watching discovery Channel live we went on to find a nice spot for the night before it got dark. We ended up pulling down a logging road to McCall flats a little further down the valley. Just as I drove onto the bridge crossing the Bella Coola river a majestic Bold eagle came flying along the river bed passing just above our heads. Two Canadian 'mascots' in not even an hour... The bridge, river, valley and eagle were so beautiful that we simply decided to camp exactly where we were. It's been a good decision as watching the sunset from the bridge was another treat as the valley turned a glowing orange.

Thank goodness no 'canadian-dream-creatures' visited us during night (except a few noisy logging trucks in the early morning) and we could continue on our way towards Bella Coola. As most of the mountains hid behind thick clouds that day we didn't spend much time at the sound and port and as the town of Bella Coola is not really mentionable as a town (especially in lock down Covid times) we found ourselves back at another Grizzly viewing spot not after long.

This time at the Fisheries Pond Campground, without a fence but still a ranger every now and then... Some of the people around were standing there since the early morning ( it was afternoon already) and said they haven't seen any signs of Grizzlys all day. But lucky as we are we once again haven't even had to wait for 15min until not only just one bear appeared but a mom Grizzly with her three cubs showed up on the other shore. It was by far the most noisy bear sighting I've had so far. The mother was constantly talking to her offspring while throwing them fish every now and then. Not after long they all disappeared back into the forrest one by one.

A little while later another Grizzly appeared first fairly far away, well hidden in a big pile of diftwood. As he didn't seemed to be satisfied with the Damon be found there he slowly made its way along the shore towards us (no worries there was a ranger with us and he was never interested in us...). Just below our viewing point he started swimming over to the opposite shore. Every now and then he dove under water to see where the tasty big fish were swimming. When in that verry moment once again a bold eagle came swishing through the river valley right before our heads too I really felt like I was watching a BBC documentary live and I real life - amazing! Such moments make all the failures and hardship from the past year we'll worth it...

As the grizzly disappeared with a giant salmon into the woods we decided that it was time for us to leave too as we didn't want to drive up Heckman pass in the dark.

From here on, well what shall I say. My truck broke town almost all the way up at the summit. A coolant hose ripped, the engine over heated, we couldn't fix it, I had to leave the truck where it was and it took them two days to tow it back to Bella Coola with the only working tow truck within 500km. As if it wasn't enough while waiting for it I lost my purse and even though I found it back and have all my iD and cards back all my cash from finally selling my old truck is gone. I am just so so grateful for Semi and Theresa who turned back with me, helped me out with everything and offered me shelter in thier camper for the two rainy nights and days. The truck is fixed once again, I got it back and made it out to Williams lake in the end. But once again it messed up with all my plans of going up north from here. After alli didn't necessarily wanted to get stranded all by myself even more in the middle of nowhere... So where to turn now? 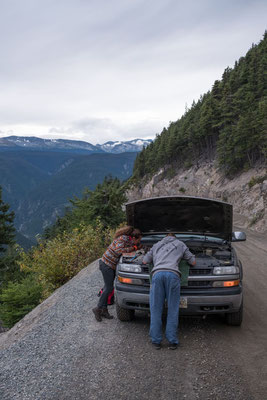 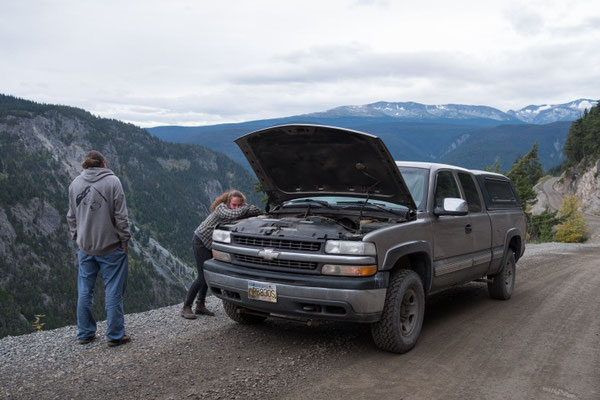